History of the Pere Marquette River 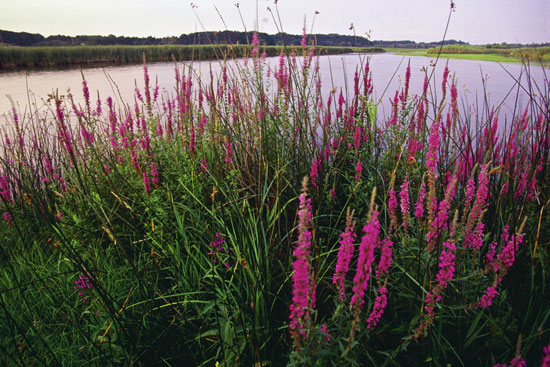 Photo by ToddandBradReed.com
There were six distinct Indian cultures that developed along the river. The first occurring around 10,000 BC with the last ending 1600 AD.

Through scientific excavation of the various village sites, it is possible to trace the development of the various Indian cultures of Michigan by study of their tools, weapons and lifestyles.


Many bloody battles were fought for control of the river in ancient times. Fierce tribal warfare was part of the later Indian's lifestyle. After one such battle, the heads of the defeated warriors were placed on stakes at the mouth of the river as a warning to others not to trespass. This gave rise to the old name for the river, "Not-a-pe-ka-gon", which meant "head-on-sticks". The village near the present site of Ludington was called "Nidebekatunning" or "Place of the Skulls". 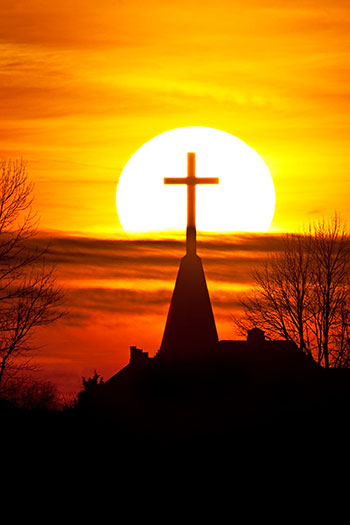 Photos by ToddAndBradReed.com
One of the first white men associated with the Pere Marquette River was probably the most famous -- the Jesuit priest, Father Jacques Marquette. Following his famous exploration of the Mississippi River with Joliet, Father Marquette was returning to his mission at St. Ignace, Michigan, when the party was forced to winter over at what is now Chicago.

There, Marquette became ill. Wanting to reach the mission before he died, Marquette and his party set out by canoe from Chicago in the spring of 1765 to follow the shoreline of Lake Michigan northward to St. Ignace. His condition worsened on the trip and not wanting to die on the lake, Marquette requested they put ashore. A crude shelter was built for him on a sand spit at the mouth of the river now bearing his name. There he died on May 18, 1675, and was buried at the site.

Two years later, members of his party exhumed the body and returned it for burial at St. Ignace, thus fulfilling Marquette's last wish. They erected a wooden cross to mark his original resting place. The site was known to the Indians as "the place of the Black Robe", their name for the Jesuits. Since that time, the original wooden cross has been replaced several times. Today a plaque and cross-topped stone monument mark the site of his death. This site is on the State Register of Historic Places. 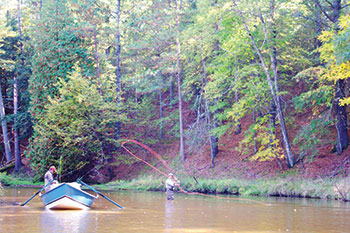 It was not until the white pine-logging boom that large numbers of white settlers were attracted to the area. In 1847, only a few farmers and traders had settled in the watershed. The first mill at Ludington was built in 1859. It was small and served primarily local needs. In 1869, however, a general movement in the manufacture of pine lumber began.

In 1870, it was estimated that the watershed contained over three billion board feet of virgin pine sawtimber. Hardwoods and other species were then of little consequence. Soon huge volumes of white pine logs were floating down the river to feed the hungry saws at Ludington. Starting with a capacity of only three of four million board feet per year, by 1880 the eight Ludington mills were producing a combined total of 10 million board feet. With water improvements, this increased to 15 million feet per year. The seemingly inexhaustible supply of pine eventually was gone.

From 1870 to 1896, 3 1/4 billion board feet of pine were driven down the river, cut into logs and shingled and shipped to markets throughout the Midwest. A large share of it was used to reconstruct Chicago after the disastrous fire of 1871. This volume of timber would, under present-day standards, provide enough lumber to build 312,000 three-bedroom houses -- enough to house a new city with the population of Detroit.

With the pine gone, the lumber barons set their sights on the virgin forests farther west. Not all of the lumberjacks went west with them. Many of the Swedes, French, Poles, Danes, Dutch, Irish and English that had cleared the land now stayed to settle and farm it. Some logging of the hardwoods, hemlock and other species spurned by the pine loggers continued into the 1900s. However, it never approached the frenzy or volume of earlier pine days.

The Pere Marquette Railroad was built to carry those logs which were too heavy to float on the river to the Ludington mills. Hemlock bark was peeled to product tannin for the leather industry. Loggers were now farmers during the summer months, and the days of the brawling, brawny, fast-spending lumberjack were gone. The lumberjacks and timber barons had left their mark on the area. The names of many creeks, hills, lakes, roads and bridges can be traced to people or happenings of the logging days.

They also left their imprint on the land which was now desolate and bare of trees. The Michigan grayling was disappearing from the river. Eroded riverbanks marked the location of log rollways. Fires burned unchecked in the logging slash. Some of their legacy is still visible today if one knows how and where to look. Occasionally, one of the old logs buried nearly a century in the stream bed will rise up to snag a fisherman's fly or dump the unwary canoeist. Rollways still have not healed and remain as raw eroded banks.


There are two sites in the immediate vicinity of the Pere Marquette River that are on the National Register of Historic Places. One is the Marlborough Historic District which is located just south and east of Baldwin. This town was built during the experimental stage of Michigan's cement industry and was begun by the Great Northern Portland Cement Company. Ruins are all that remain at this privately-owned site. The other site on the National Register is the Nat-a-pe-ka-gon Site in Custer Township. This is a relatively undisturbed multicomponent site preserving information on the Middle and Late Woodard Periods in Western Michigan. One occupation contains early French trade materials.